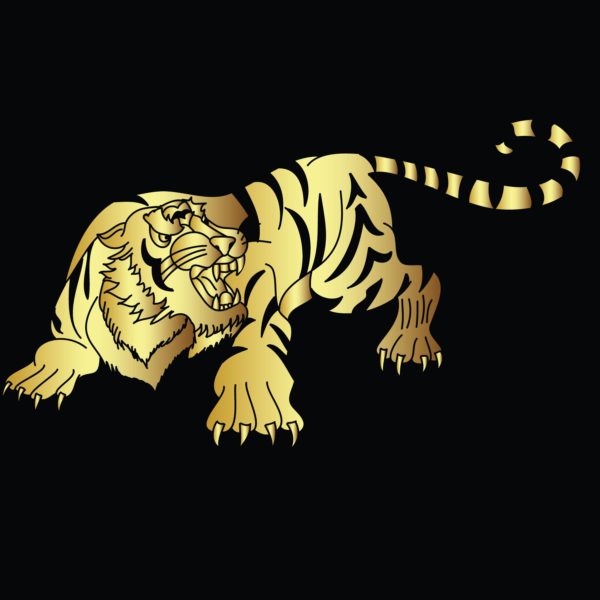 Read by Jana
Adapted by Bertie
Art by Depositphotos.

Hello, This is Jana

And I'm here with a story for the Chinese New Year, otherwise known as the Lunar New Year, which is celebrated in many countries across South East Asia - and even beyond such as here in London!

It is the most important day in the Chinese calendar where billions of people feast with relatives, watch parades and pray for good fortune for the year ahead.

2022 is the year of the Tiger. As you may know, every year in the Chinese Calendar is named after an animal. There are 12 in all. The Tiger comes third after the Rat and the Ox. People born in the year of the Tiger are courageous and adventurous. But the Tiger did not always represent those characteristics - as this story shows.

A long time ago, the third animal in the Chinese Horoscope was the Lion, not the Tiger. The Lion was fierce and known as the King of the Forest. The Tiger, meanwhile, was a cute and cuddly creature who never hurt so much as a fly. He was big and strong for sure, but he did not know how to use his strength. His favourite food was greens and spinach, known as Hin Choy. If you stroked him behind the ears, he would purr deeper than any pussy cat. And if anyone so much as growled at him, he shot straight up the nearest tree and cried. In other words, he was one big softy!

The Lion, however, had rough manners and liked to boss around the other animals. He knew how to use his strength, and if any animal dared to be cheeky to him, he would swat them with his paw and knock them senseless. Together with his best mates, the Horse and the Bear, he terrorised the other animals and bullied them whenever he wanted to.

The Jade Emperor was angry with the Lion. He looked down from his throne up in Heaven and saw how the Lion abused his strength and power.

"But who else can be king of the Forest?" He asked, "For none of the other animals come near him for strength and force."

"What about the Tiger?" Suggested one of the Jade Emperor's attendants.

"The Tiger? He's softer than a silk pillow and shy of his own shadow! He runs away from danger faster than the Rabbit! How could the Tiger command respect as the King of the forest?”

"Sire, what you say is true, but his body is at least as strong as the Lion's. So perhaps all he requires is some assertiveness training?"

"Assertiveness training? Martial Arts training is more like it!" Exclaimed the emperor. And that gave him an idea.

He sent a messenger to the World with orders for the Cat to teach his cousin the Tiger to hunt and fight. The Cat and the Tiger took up the challenge with relish. Every morning at the crack of dawn, they rose for their training. It was a three-week programme.

Week One was self-defence, ducking, diving, and dancing on their feet to avoid the enemy's blows.

Week Two was one to one combat, including scratching, spitting and biting.

Week Three was stalking, including crawling on their bellies through the undergrowth, dropping down from trees, and suddenly springing from a still position.

At last, the Cat decided the Tiger was ready for his first fight.

"Don't take the Lion on right away," he said, "better start with one of his best mates."

So the Tiger challenged the Horse. In reply, The Horse laughed because he knew the Tiger as a big soft pussy cat, but before he had finished neighing, the Tiger had jumped on him and pinned him to the ground. So the Horse had to surrender.

Next, the Tiger called The Bear to a fight. To begin with, the Bear tried to punch the Tiger, but the Tiger was too quick for him and ducked the punch. Then, the Tiger bit the Bear’s foot, and the Bear hopped and howled and gave up.

So now the time was ripe for the big fight. The Cat billed the event as the Great Rumble in the Jungle. All the animals jostled for a good view. But none of them, except the Cat, expected the Tiger to last a single round.

The Tiger and the Lion both sprang at each other simultaneously. Then, they both stood on their hind feet, fighting paw to paw. It suddenly became clear to the animals watching that the two Big Cats were more evenly matched than they had thought.
The fighters ducked and dived and punched and scratched, but the Tiger's preparation paid off, and he finally knocked the Lion out with a hook of his left paw.

As soon as the Lion was counted out, the Tiger danced up and down and sang:

No one was more delighted with the Tiger's victory over the Lion than the Jade Emperor. He summoned the Tiger to his Heavenly Palace and awarded him Three Stripes, one for each of his victories over the Horse, the Bear and the Lion.

But that was not the end of the story, because soon after that, the Turtle Monster of the East Sea invaded the land with an army of crabs and scorpions. The Tiger led the army of animals and defeated them in Battle. Now the Jade Emperor was even more impressed with the Tiger. He drew a vertical line through the three stripes on his forehead. This formed the symbol for a King in Chinese writing. From then on, The Tiger ruled the Forest and the Lion was banished to the South. And most importantly for this story, the Tiger now took the third position in the Chinese Zodiac and once every 12 years we celebrate the Year of the Tiger. People born in the Year of the Tiger are natural leaders, full of ambition and hungry for excitement, not at all like the soft and shy Tiger at the start of the story.

And I’m delighted to dedicate this story to Shan Mahtani Cheung, aged 5 and living in Singapore. We are very grateful to Shan and her family for Supporting Storynory on Patreon.
Her Dad Darius writes,
Shan listens to storynory every chance she has in the car and loves retelling the stories to her friends.
Well thank you Shan for listening to storynory and especially for sharing our stories.

For now from me, Jana at Storynory.com, Happy Chinese New Year!