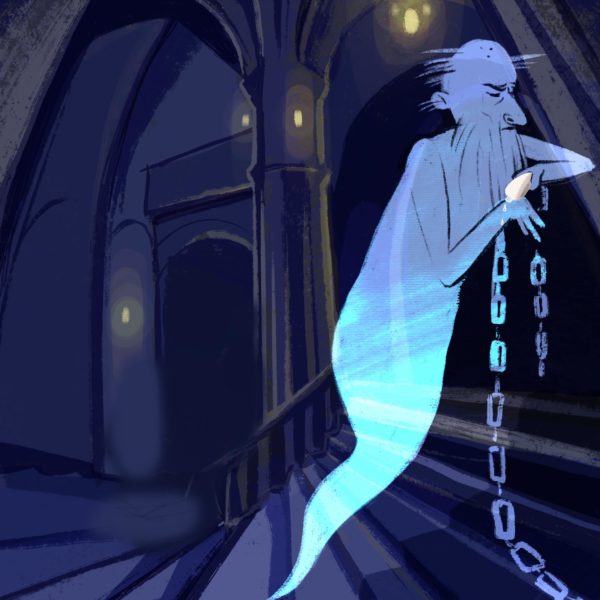 Hello, This is Jana,

Now, I have to let you know that I love ghost stories - but Bertie doesn’t like them because he gets spooked easily. But I’m really pleased because Halloween is coming up! And I’ve got the perfect excuse for us to put out some scary stories - but of course, this story comes with a wee warning - if you don’t like being scared, please don’t listen. We’ve got loads more non-scary stories that you can listen to any time you like on storynory.com.

This ghost story was written down by an ancient Roman called Pliny, who Bertie tells me, wrote letters in Latin to his friends. In one letter, Pliny asked a Roman Senator if he believed in ghosts and then went on to tell him this story.

There was in Athens a large and roomy house, which had a bad reputation.

In the dead of the night a noise like the clanking of iron was often heard. And if you listened carefully, it sounded like the rattling of chains, distant at first, but approaching nearer bit by bit.

Soon after, a spectre appeared in the form of an old man, of extremely thin and dirty appearance, with a long beard and messy hair, rattling the chains on his feet and hands.

The people who then lived in the house, passed their nights wide awake in a state of the most dreadful terror imaginable.

The lack of sleep ruined their health and made them ill, to the point of scaring the life out of them. During the daytime, even when the spirit did not appear, they imagined seeing it before their eyes, and the ghost kept them in perpetual fear.

Eventually, they left the house entirely to the ghost, as they said no person in their right mind could live under that roof.

However, a wily real estate agent of Athens put out an advertisement offering the house up for sale or rent.

It happened that Athenodorus, the philosopher, came to Athens at that time, and the advertisement for the house caught his eye.

The low price raised his suspicion. Nonetheless, when he heard the whole story about the ghost, he was far from put off. In fact, he all the more wanted to rent the house, which he did.

Towards evening, as darkness fell, he got ready to spend the night in the front part of the house. After calling for a candle, together with his pencil and writing tablets, he ordered his servants to go to bed.

He wanted to occupy his mind, so as to prevent his thoughts from turning to scary things, such as imaginary noises and spectres.
So he kept himself busy, writing with the utmost concentration. The first part of the darkness passed in complete silence. Nothing unusual happened.

But just after midnight, he heard a clanking of iron and a rattling of chains.

He neither lifted up his eyes nor laid down his pen, but in order to keep calm and collected, he tried to persuade himself that the sounds were anything but a ghost. The noise increased and advanced nearer, till it seemed at the door, and at last in the room. He looked up and recognized the ghost exactly as it had been described to him: it stood before him, beckoning with its finger, like a person who summons another.

Athenodorus in reply made a sign with his hand that it should wait for a little, and turned his eyes again upon his papers; the ghost then rattled its chains over the head of the philosopher who, looking up and seeing it beckoning, immediately arose and, candle in hand, followed it. The ghost slowly stalked along, as if weighed down by its chains, and, turning into the courtyard of the house, suddenly vanished. Athenodorus, now being left alone, made a mark with some grass and leaves on the spot where the spirit left him. The next day he reported to the magistrates and advised them to order that spot to be dug up.

When this was done, the skeleton of a man in chains was found there. The bones were collected together and publicly buried, and the ghost, having been appeased by the proper ceremonies, haunted the house no more.

And that is an ancient ghost story, from the time of Rome under the emperor, Trajan. It was written by Pliny the Younger. I hope you found it interesting, and not too scary.

For now, from me Jana, bye for now.