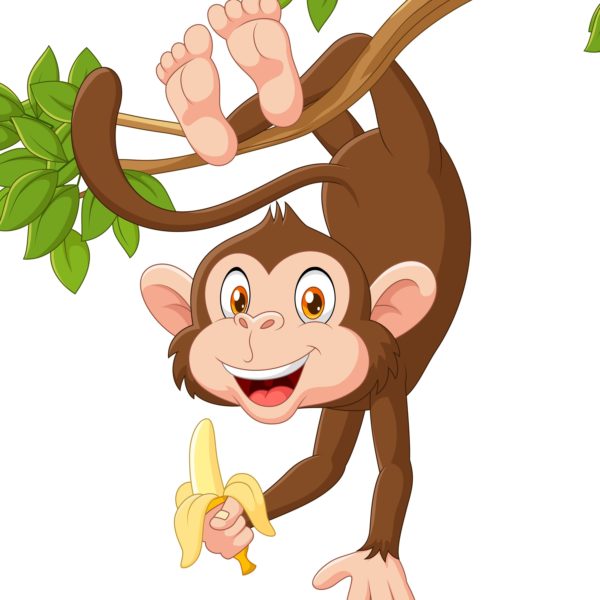 Why Bananas Belong to Monkeys

Dedicated to Alethea and Gray

And I'm here with another lively monkey story from Brazil. We think our youngest listeners will most appreciate these cheeky stories. In this episode, we answer a question that has long puzzled some of the world's greatest thinkers. Why is it that monkeys believe that they rightfully own all the bananas? Listen on to find out.

Once upon a time, when the world was new, there was only one kind of banana, but very many kinds of monkey. In those days, a woman kept a big garden full of banana trees. It was difficult for the woman to gather the bananas herself, so she made a bargain with the largest monkey. She told him that if he gathered the bunches of bananas, she would let him keep half. So the monkey climbed the tree and picked the bananas. When he took his half, he gave the woman the bananas which grew at the bottom of the bunch and were small and wrinkled. He kept the big fat ones for himself and carried them home to let them ripen in the dark.
The woman was very annoyed. She lay awake all night trying to think of some way to get even with the monkey. Then, at last, she thought of a trick.

The following day she made an image of wax that looked like a boy. Then she placed a large flat basket on the top of the wax statue's head and in the basket, she placed the ripest bananas she could find. They certainly looked very tempting.

After a while, the largest monkey passed that way. He saw the wax statue and thought that it was a boy selling bananas. He had often pushed over boy banana peddlers, upset their baskets and then run away with the bananas. However, this morning he was in a good mood, so he thought he would first try asking politely for the bananas.

Then the monkey called out in his loudest voice, "Oi, peddler boy, peddler boy, if you don't give us a banana, I'll give you such a push that it will upset all your bananas."

The wax statue was silent.

The monkey ran toward the statue and struck it hard with his hand. But what was this? His hand remained firmly embedded in the wax.

"Oi, peddler boy, let go of me hand," the monkey called out. "Let go of me hand and give me a banana, or else I'll give you another hard blow with me other hand."

The wax statue did not let go.

The monkey gave the image a hard, hard blow with his other hand.

The other hand remained firmly embedded in the wax.

The image of wax did not let go.

The monkey gave the image a kick with his foot, and his foot remained stuck fast in the wax.

"Oi, peddler boy," the monkey cried, "let go of my foot. Let go of my two hands and my foot and give me a banana or else I'll give you a kick with my other foot."

The image of wax did not let go.

Then the monkey, who was now very angry, kicked the wax statue with his foot and his foot remained stuck fast in the wax.

The monkey shouted, "Oi, peddler boy, let go of my foot. Let go of my two feet and my two hands and give me a banana, or else I'll give you a push with my body."

The wax statue did not let go.

The monkey gave the image of wax a push with his body.

His body remained caught fast in the wax.

Then the monkey made such a noise with his cries and shouts that monkeys came running from all directions.

There were big monkeys and little monkeys, and middle-sized monkeys. A whole army of monkeys had come to the aid of the largest monkey.

It was the very littlest monkey who thought of a plan to help the largest monkey out of his plight. This is what they did. The monkeys climbed up into the tallest tree. The tallest tree still was not tall enough, so they piled themselves one on top of another until they made a pyramid of monkeys.

The monkey with the very loudest voice of all was on top, and he cried as loud as he could to the sun, asking the sun to rush to the help of the largest monkey.

The sun came at once.

The sun poured his hottest rays down upon the wax. After a while, the wax began to melt. The largest monkey was at last able to pull out one of his hands. The sun poured down more of his hottest rays, and soon he was able to pull out his two hands. Then he could pull out one foot, then another, and in a little while, his body, too. At last, he was free.
When the woman saw how the largest monkey had escaped, she was very discouraged about the whole idea of raising bananas. So she decided to move to another part of the world, where she raised cabbages instead of bananas. The monkeys now owned the big garden full of banana trees. From that day, the monkeys have thought that they own all the bananas in the world.

And that was "Why Bananas Belong to the Monkey", read by me, Jana for Storynory.com. It comes from a traditional Brazilian story collected by Elsie Spicer Eells in the year 1917.

And I’m delighted to dedicate this story to Alethea and Gray who kindly support us on Patreon. We hear that Alethea particularly likes Dragon stories. Well Alethea, we hear you! And we are looking for some good dragon stories. For now, we hope you are enjoying this summer of cheeky monkey stories here on Storynory.com. Thank you Alethea, Gray and family for your support - we really appreciate it.

And don’t forget everyone, there are loads of free stories on Storynory.com, and in our apps, and on our podcast! So keep listening and please tell everyone about Storynory!
Bye for now!